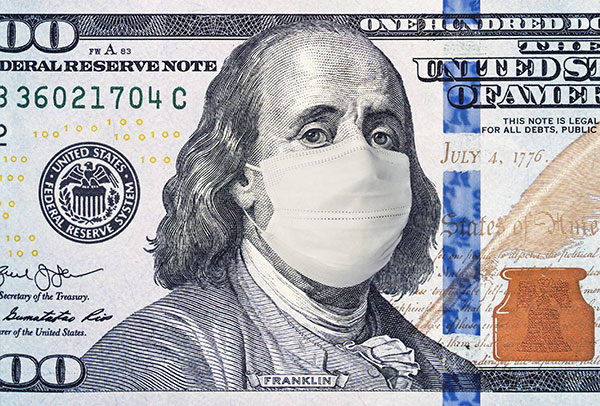 Even in just a couple of months, so much has changed since the Federal Reserve Open Markets Committee (FOMC) initially met with President Biden. His American Rescue Plan passed, new COVID-19 infections have fallen by two-thirds, and many states have ended economic lockdowns. On top of that, tens of millions of Americans have received vaccinations.

The passage of the American Rescue Plan and the perking economic outlook are sharpening drawing concerns about inflation among career investors. Speculators expect the economy to come surging back this year, but along with that could come higher prices. The Fed seems nonplussed. The federal funds rate is the same since March 15, 2020: 0.00% to 0.25%. Investors are still giving “side-eye” to how long this sweet low will last.

Good news: The US economy is on the mend

A year ago, the FOMC had established emergency policies cut the fed funds rate to 0.00% to 0.25% and restarted quantitative easing (QE) to buoy the bond market. The Fed has since added $3.5 trillion to its balance sheet, and it’s not likely to raise rates again until 2023.

QE and the more than $5 trillion in the federal government’s stimulus spending have helped the U.S. economy heal more quickly than expected. The direct stimulus and unemployment insurance payments helped Americans increase their savings over 2020. The recent $1,400 per person stimulus is icing on the cake for many.

With a post-Covid-19 recovery within reach, the U.S. economic recovery is underway. After peaking at almost 15% in April 2020, the unemployment rate declined to 6.2% in February 2021 and continues to decline. The Fed foresees U.S. GDP growing 6.5% for 2021, according to its latest Summary of Economic Projects (SEP) forecast, up from an estimate of 4.2% almost three months ago. The unemployment rate dropped to 4.5% and is still falling.

Compared to the glacial recovery of the Great Recession, the Covid-19 recovery is looking extremely rosy!

So what about inflation?

QE and Congress’s stimulus aid was aimed at keeping Americans and business going until recovering. Now that recovery is coming, investors wonder how the Fed can keep prices stable. Rising inflation is a fair concern. The federal government is spending a lot of money, but Powell said the Fed will tolerate inflation above its 2% target for a period of time before raising interest rates. The Fed actually is fine welcomes higher prices, because inflation growth has lingered well below its target since the Great Recession—and low inflation isn’t always good.

While the labor market has improved dramatically since this time last year, many millions are still out of work today. The U.S. isn’t alone here. The Fed believes inflation will rise 2.4% this year, and the core inflation (which strips out volatile food and energy prices) will gain only 2.2%.

Bond yields have been rising at a fast clip. The yield on the 10-year Treasury Note was 0.917% on January 4, 1.148% on February 4, and 1.552% on March 4. The latest level has basically been a ceiling for the Treasury market, and that level has kept rates from further rise. The uptick has also attracted foreign investments, which further helps to subdue the rate of inflation.

The Fed wants to see inflation rise substantially for a sustained period before it considers affecting interest rates. Some investors are concerned the Fed might end unable to slow inflation’s momentum, but convention leads us to believe that any inflation spike would be short-lived.

This is where it’s important to note that mortgage-backed security (MBS) prices determine home loan rates. When Treasury yields rise, investors in mortgage-backed securities demand higher rates. MBS prices and home loan rates will be largely influenced by inflation, but also the economy’s ability to rebound, once the nation and the rest of the world have fully flung open their doors for business. As economies reopen, rates should continue to gradually rise.

It’s wise to take advantage of this stimulated economy, but also think long-term and realize that volatility is lurking. While the influx of government money will be good in the short term–say, the next year or two–in the next several years we can expect to see taxes going up and higher interest rates. There are wildcards that could still play out, such as another COVID-19 outbreak or an aggressive wave of variants that hinder the economy. For now, in the near term, rates are excellent and it’s a great time to take advantage of real estate investing.

If you’re seeking quality real estate investments throughout the Pacific Northwest, we’re here to help. Juniper Capital provides private real estate financing, including hard money loans for commercial, construction, multi-family residential opportunities and more. If you would like more information on this topic, call us today.